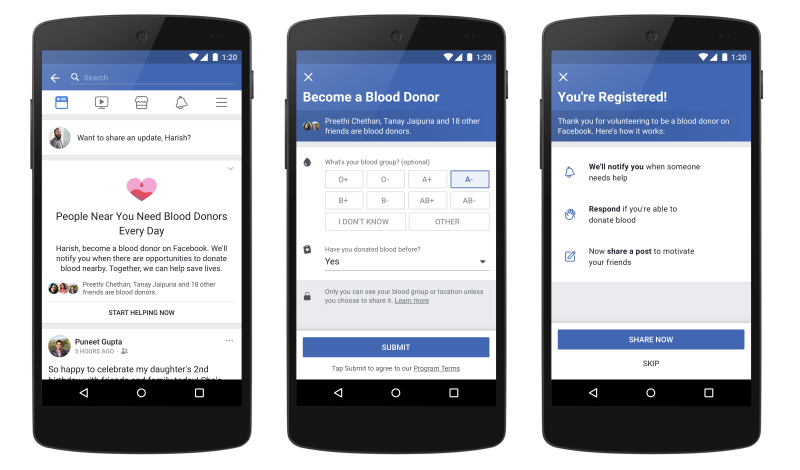 More than four million donors in India have signed up for Facebook’s blood donation feature and the company will now expand this feature to Bangladesh, the social media giant has said.

In October, Facebook launched a new blood donations feature, starting in India, to make it easier for people to donate blood.

“There are now more than four million blood donors signed up on Facebook in India.

Hospitals, blood banks and non-profits can create voluntary blood donation events on Facebook, and nearby donors are notified of the opportunities to donate blood.

“In early 2018, we will expand blood donations to Bangladesh, where, like India, there are thousands of posts from people looking for blood donors every week,” Gleit noted.

Facebook also announced new tools and initiatives to help people keep each other safe and supported on its platform.

“Mentorship and Support is a new product where mentees and mentors come together to connect and interact directly with each other and progress through a guided programme developed by nonprofit organisations,” Gleit posted.

All donations made through Facebook payments to nonprofits will now go directly to those organisations.

“People will now be able to sync their off-Facebook fundraising efforts to Facebook fundraisers, making it easier to tell friends and family about the causes they support on and off Facebook,” the company said.

Facebook also introduced a Community Help API, which will give disaster response organisations access to data from public “Community Help” posts that can offer important information about the needs of people affected by a particular crisis.

“We are piloting the Community Help API with NetHope and the American Red Cross,” Facebook said.